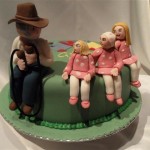 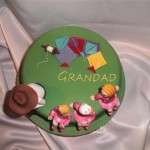 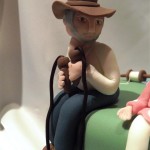 This little guy and his three grandaughters were requested by a friend and her daughter – the story is that the gentlemen concerned, his wife, and ourselves are all members of a kite flying club – his daughter was holding a birthday tea and wanted something special.  The girls had encouraged him to have a go at skipping on one their previous outings,  apparently with amusement all round, so the cake had to feature the girls, Scott and his skipping rope, along with some kites (I decided on indian fighting kites, just one of his specialities).  By all accounts it was a resounding success, particularly as it was a total surprise for Scott.