I seem to have developed a theme in a few of the cakes I have made now – on the basis of seeing the Jaguar cake I managed to get two orders in the same week based on the same design.  A real coincidence as far as the timing goes, as one had been ordered back in June, and the other a new short notice order.   I was given details of the recipient of the cake in each case, one a motorbike enthusiast and the other a 17 year old who was picking up a car for her birthday, so that I could make them as personal as possible. 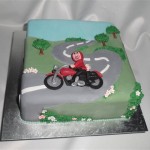