This year I took the plunge and did something I had been contemplating for some time.  The circumstances arose where I could attend the Cake International Show in Birmingham this year, which I hadn’t previously been able to due to other commitments.  To make the most of the opportunity I decided to enter one of the classes in the show competition, just for the experience really as I didn’t have huge expectations of my capability to compete at the level of entries which I had seen.

The first challenge was to find a design that would show a variety of skills, was stable enough to transport the distance to Birmingham, and on the advice of a previous entrant, one which I would be interested in enough to do it justice.  I spotted the fan design in white on a cake in an American cake magazine and instantly had ideas on how to adapt it to make it more my own style.  I have wanted to make gelatine bubbles for a long time now so incorporated those, and a touch of same colour brush embroidery gave texture on otherwise plain sides of the middle tier. 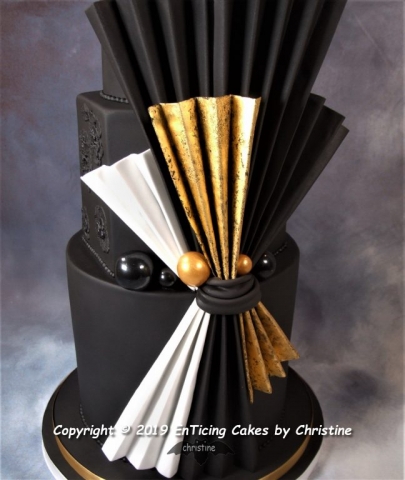 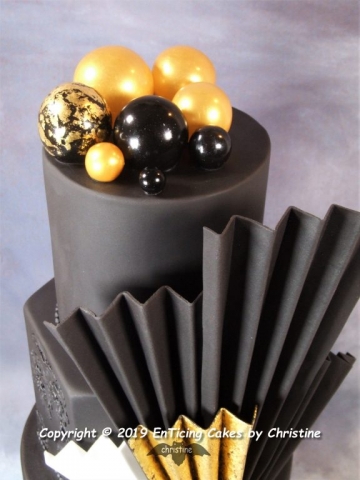 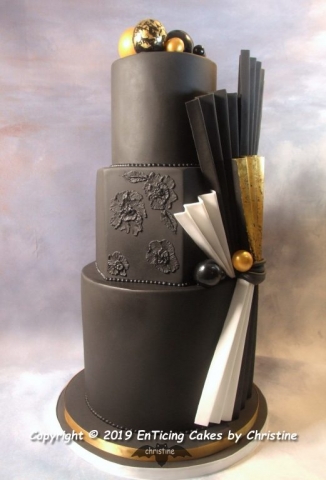 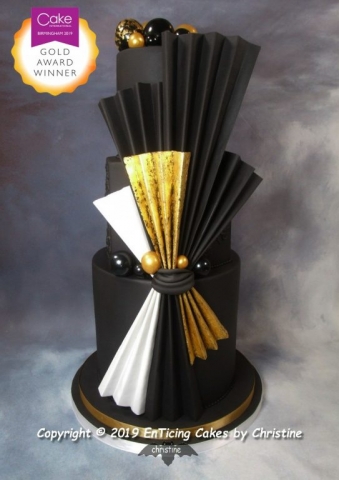 I used gold leaf on some of the fans to make them stand out.  The picture does not do the gold justice, it really catches the light and shines out.  As my main interest is cakes which are out of the ordinary,  black sugarpaste, although tricky to work with, was my first choice of colour once I had decided on a non-white cake.

Well the judges apparently agreed that my design was interesting, I was complimented on the finish on the black sugarpaste and only dropped 10 points out of 100, which gave me a gold award – one of 7 golds awarded in a class of over 100 entries.  I went into the competition thinking that I would be happy if I managed to get a Merit, so a gold was way above my expectations and I had to read the results twice before it sunk in!